The American Heart Association has released brand new added sugar recommendations for children based on a new study.

Published in the health journal Circulation, the study looked at how sugar affected the heart and cardiovascular health of kids between 2 and 18. Based on the results, the AHA recommends that children in that age range should take in no more than six teaspoons of added sugar in a given day, which roughly translates to 100 calories or 25 grams. They advise that children younger than two should ingest no added sugars.

Miriam Vos, M.D., a professor of pediatrics at Emory University and lead author of the study, explained the authors’ reasoning in the AHA’s official statement.

“Our target recommendation is the same for all children between the ages of 2 and 18 to keep it simple for parents and public health advocates… For most children, eating no more than six teaspoons of added sugars per day is a healthy and achievable target,” said Vos.

Vos went on to describe the ubiquitous nature of sugar and the danger too much sugar could pose to kids:

“Children who eat foods loaded with added sugars tend to eat fewer healthy foods, such as fruits, vegetables, whole grains and low-fat dairy products that are good for their heart health. There has been a lack of clarity and consensus regarding how much added sugar is considered safe for children, so sugars remain a commonly added ingredient in foods and drinks, and overall consumption by children remains high – the typical American child consumes about triple the recommended amount of added sugars. Studies of nutrients such as added sugars are challenging, but over time the number of studies in children has increased. We believe the scientific evidence for our recommendations is strong and having a specific amount to target will significantly help parents and public health advocates provide the best nutrition possible for our children.”

The researchers further go on to pinpoint sugary drinks, like sodas and sports drinks, as one of the most common sources of sugar in kids, saying, “Children should not drink more than one 8-ounce sugar-sweetened drink a week yet they are currently drinking their age in sugary drink servings each and every week,” and recommend weaning children off them as soon as possible. 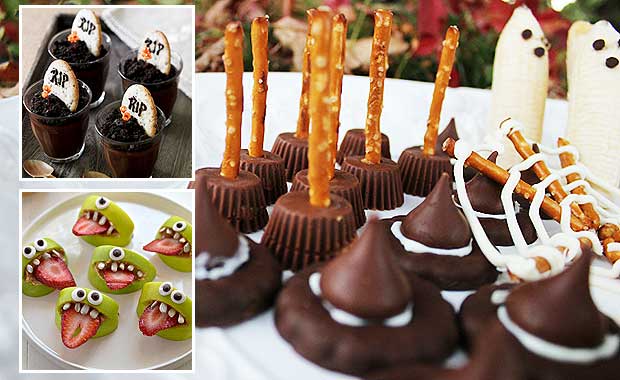 Whip Up These Delicious (And Sometimes Healthy) Halloween Treats!
It’s time to step up your Halloween treat game! No, we’re not talking the candy you give to trick-or-treaters. We’re talking about some spookily delicious Halloween treats for you and the ...
click here to read more
Advertisement - Continue reading below
Share  On Facebook