Meet Casey Pearlman and Yasmin Idris, a pair of 13-year-old girls who are putting a positive twist on Halloween.

This year for Halloween, Pearlman and Idris combined their religion and friendship to create “The Juslims,” a superhero team.

Pearlman’s dad Jeff tweeted out a picture of the superhero pair explaining their idea for Halloween.

“My daughter is Jewish. Her best pal is Muslim. For Halloween they created a superhero team: The Juslims. I’ve rarely been more proud. Truly.”

My daughter is Jewish. Her best pal is Muslim. For Halloween they created a superhero team: The Juslims. I've rarely been more proud. Truly. pic.twitter.com/zqPCCwzshR

The tweet was quick to go viral and has since been retweeted over 48,000 times (as time of publication).

“There’s just so much hostility in the air and in this election season,” Jeff Pearlman shared with BuzzFeed. “This was just a refreshing, innocent reminder that we don’t have to be this way. We do not have to let this divisiveness take over right now.”

The internet loved the Juslims costume and could not stop raving about it on social media.

A truly appropriate time to use word, "Awesome".

This is how you actually make America great again. https://t.co/tdPWMS2QFI

@BenMank77 They are making America great again. Cheers to them and you!

The idea for the costume was completely original and features a glittery logo of “JM,” which represents Jewish-Muslim. The girls also included a small disclaimer sharing, “Don’t worry, it’s not religious, it’s not offensive,” since their school does not allow religious or offensive costumes on Halloween.

The girls first got the idea for their superhero name during a car ride with Pearlman’s dad when they were discussing what their religions had in common.

“We were making up fun names that combined both of our religions together and he decided to call it ‘Juslims,’” Pearlman shared. “And we kind of stuck to it for a long time,” Idris explained.

After that, the pair decided it would be a “funny thing” to dress up as this Halloween.

“When we realized that we were standing up to what [Donald Trump] believes in, that kinda made me really happy,” Pearlman said. “Me and Yasmin both disagree with almost everything that [Trump’s] deciding to do. That didn’t at first influence our costume idea. But when we realized it was standing up to what he believes in, that kind of made me really happy.”

“I’m Muslim and she’s Jewish; I’m black and she’s white. I think it’s really empowering for people to see us as role models in saying let’s stop the war and to show equality between all people,” Idris shared.

Both of the girls were extremely thrilled about the positive response to their costumes and “were excited and happy to have spread a valuable message,” shared BuzzFeed.

“I think a lot of people find it really interesting that kids are standing up against a lot of what’s happening in the media and the world right now,” Pearlman said. “People were impressed that kids realize that and want to change something.”

So, what is the Juslims’ major superpower?

“To watch each other’s back,” Idris said. “We’re a super team, like friends forever.” 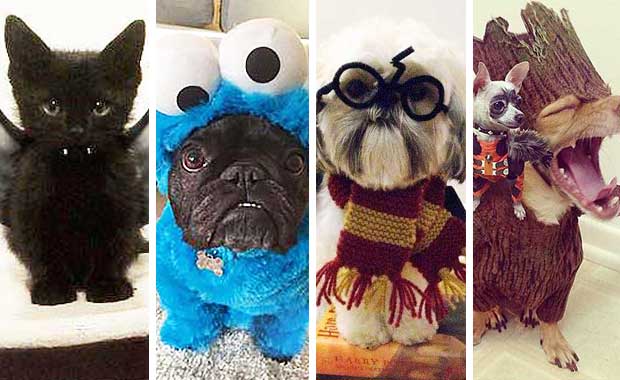 The Cutest Halloween Pet Costumes
Dressing up the kids for Halloween is a chore. They want the best, most popular costume that’s almost always sold out of the first five stores you visit. Even dressing up ...
click here to read more
Advertisement - Continue reading below
Share  On Facebook