Imagine being so passionate about something that you would risk life and limb to get it. A handful of the Maio people who live primarily in a small village in southern China’s mountains have done just that.

Following their ancient doctrines, they scale massive rocks without any ropes or gear, using only their bare hands, feet and strength to procure an herbal leaf grown only there. They believe it’s worth the risk as it contains medicinal properties to remedy diseases such as asthma and rheumatism.

They are known as “Spider-Men” for their agility and ability to cling to these mountainous crevices without a safety net to catch their fall. Even though some of these walls tower over 300 feet, the climbers have a zen-like quality about the dangers and trust in their own bravery to protect them.

Only a few locals attempt this death defying climb. Meet 53 year-old Wang Fengzhong who has been happily climbing for many years, following in his ancestors’ footsteps. They practiced this climbing tradition for decades which evolved from climbers who would drag coffins up the steep cliffs – also without any ropes or pulleys.

Fengzhong told Great Big Story, “We rock climb with nothing but our hands because long ago our ancestors didn’t have climbing gear.”

However Fengzhong doesn’t go the journey alone – which takes four or five hours to find the right herbs on the cliffs. He is assisted by Luo Dengping, a lone female “Spider-Woman” who can also climb rocks the same way.

She was originally forbidden to master the requisite skills because of her sex. She says it’s steeped in an “old custom where only males are allowed to learn it.” Refusing to accept that exclusion, she solicited the proper training from her father. The wisdom he gave her once was, “You need to not only climb up, but also come down. Touch the first rock with your hand or foot. If you can’t touch it, don’t move.”

Their climbing skills are unparalleled and they are the only people who can acquire these herbs.

Once they reach their destination, they plant a red flag and can let out an exhale for reaching their achievement unscathed. Fengzhong hopes more young people will join the “Spider-Men” and master their skills.

Here is the amazing behind-the-scenes video from Great Big Story of Fengzhong and Dengping in action as they selflessly save the lives of others while risking their own. 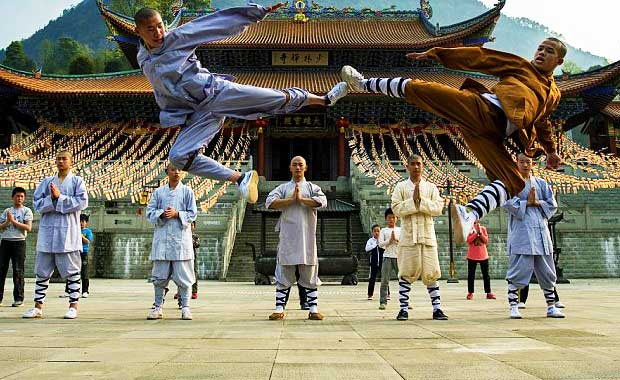