A couple from Boulder Creek were in otter delight when a friendly furry mammal crashed their kayaking birthday party in the Bay Area. Heather Van Nes and her husband John Koester were in Elkhorn Slough near Moss Landing in Northern California when they spotted a raft of sea otters nearby.

Curiosity caught the couple who rowed nearer to them, but kept a distance of at least 50 feet when one of the otters took their gaze as an invitation. Van Nes took a photo thinking it would go underneath them but it didn’t. The couple who were in utter awe told NBC Bay Area local news they were  “shell-shocked”  as they watched it promptly swim right over to Koester’s kayak.

Then to their surprise it jumped right in making itself comfortable sitting at the helm of the kayak like a sea captain. Koester said, “the otter was having a good time,” playfully rolling around, scratching its belly and ears even nibbling on his shoes. Van Nes added, “He was just chillin, like, ‘Hey, we’re going to go for a ride.'”

The otter which weighed at least 80 pounds hung out with Koester for at least 15 minutes, content as could be, warming its fur in the late morning sun. It wasn’t until Koester started paddling when the otter ended its little visit and jumped back into the water.

When Van Nes and Koester told their tale to the kayak rental shop staff they weren’t the least surprised. Apparently, otters have a thing for yellow kayaks in Elkhorn Slough.

Below is a YouTube video of a sea otter who brazenly made a beeline for this man’s kayak in the same waters. You can see him sniffing around, trying to get a foothold on the oar, but frantically slipping off the rubbery surface. It relentlessly tries again and again to get into the kayak until it finally gives up and swims away.

This one wasn’t as successful making a landing, but it sure made the kayaker’s trip more enjoyable. 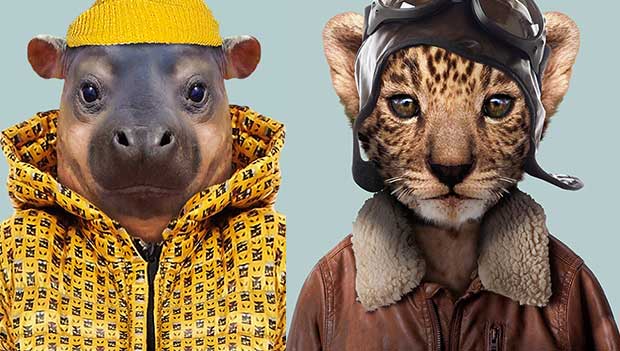 Artist Photoshops Animal Cubs in Human Clothing and You’ll Want to Hug Each and Every One
“Zoo Potraits: Become the Animal” is a photo series by Barcelona-based artist Yago Partal. The creative project was “influenced by the animal kingdom, cartoons and fashion,” which fascinated Partal as a child, ...
click here to read more
Advertisement - Continue reading below
Share  On Facebook