Dolly Parton reached out to Taylor Swift to thank the birthday girl for donating cash to her new charity as she prepared for a star-studded telethon in Tennessee on Tuesday night.

Parton launched the My People Fund at the beginning of December to raise much-needed funds for whole communities left homeless by the wildfires that hit areas of her native state, and Swift was one of the first celebrities to dig deep and donate.

As Parton launched the Smoky Mountains Rise: A Benefit for the My People Fund telethon to raise more cash for the initiative on Tuesday she had Taylor, who turned 27 the same day, in her thoughts.

Swift made a $100,000 donation last week, and Parton was more that grateful.

“Taylor Swift, I noticed through the years, she’s the first to throw herself right into any good cause,” Parton said. “Any time anything happens, Taylor’s there to make big donations and offer time and money. I’m so thankful to her. I just think she’s precious.”

Parton is still heartbroken to think about all the people who lost their homes in the fires, which forced the temporary closure of her Dollywood theme park in Pigeon Forge, Tennessee.

“These are the woods I roamed around in as a little kid,” Parton told Entertainment Tonight. “We were blessed none of my family were injured and lost in the properties, but so many of my friends and neighbors lost everything.

“You never think about a thing like that happening… The only thing I can relate to it is when we had the floods in Nashville and how devastating that was.”

The fire broke out on November 23 and burned through over 17,000 acres.

Parton has pledged she will donate $1,000 -per-month for six months to families affected by the disaster through the new charity drive.

“It’s not a lot of money, but if we make more money, we’ll just be able to help them more,” Parton said.

The country music veteran kicked off the Smoky Mountains Rise telethon with a message to viewers, asking them to give generously as they watched performances by herself, Kenny Rogers, Chris Stapleton, Chris Young, Reba McEntire, Cyndi Lauper and others.

Parton then opened the fundraiser by singing “My Mountains, My Home.”

Parton’s goddaughter Miley Cyrus and Kiefer Sutherland were among the first stars urging viewers to donate generously via taped video messages and Miley’s father Billy Ray joined Dolly in the studio in Nashville.

The “Achy Breaky Heart” singer revealed the pastor at the Little White Church in Gatlinburg, where he got married in the mid-1980s, was among the people who lost their lives in the fires. 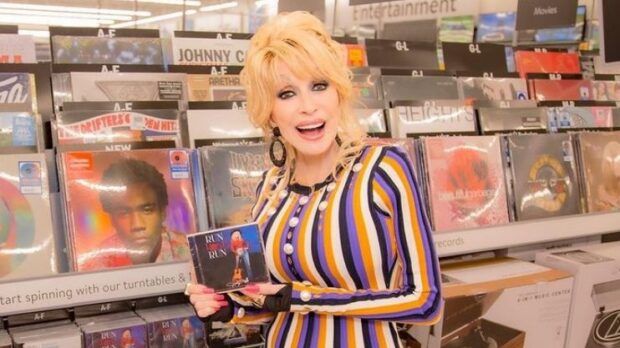