These selfies appear to be different people, but both are actually the same individual suffering from a mental illness.

In continuation with raising suicide awareness online, Ellie Newton, an 18-year-old from Reading, England, took to Facebook to share her own battle in hopes of ending the stigma.

“The two pictures show two sides of me,” she wrote. “The left is the face I put on for the world while the right is the raw, unedited me.”

According to The Sun, Newton has lived with severe depression and anxiety since age 14 and was bulled online by her peers. She reportedly used to burn herself with her hair curlers and strangle herself with the cords in attempts to desperately make herself “feel just a little better.”

Her scars serve as a reminder that she can overcome any obstacle – and she shows that strength in her courageous Facebook post.

Her post has gone viral and she writes, “This is what my illness does to me,” in regards to her unkempt and exhausted appearance.

On the other hand, in regards to her “normal teenager” pose, Newton asserts “Please don’t tell me I don’t have anything wrong with me just because I look okay.”

Newton hopes the post will help those with mental illnesses. She also wants to encourage others to recognize the warning signs of mental illnesses, find out how to approach people who are suffering from one and where to get help.

“The more we talk about it, the less awkward it becomes.” 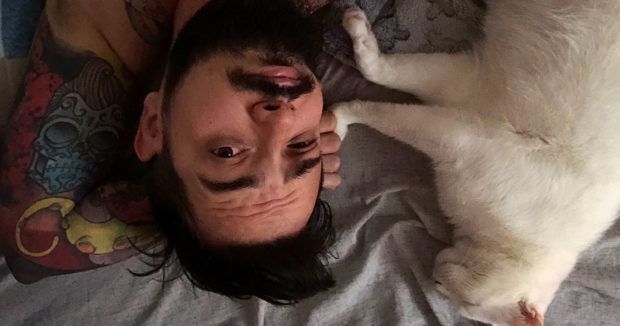 These People Tried to Take Selfies With Cats, and the Shots Are Downright Hilarious
Who doesn’t love cat selfies? Well, cats, that’s who! While dogs may be known for being pretty tolerant, the same can’t really be said about cats. Sometimes they feel like ...
click here to read more
Advertisement - Continue reading below
Share  On Facebook