Animals have played a huge role in our current and ongoing knowledge of space travel. As one example, there’s Ham the Chimp who, in 1961, became the first great ape to be launched into space. Additionally, in school, we all learned about Laika, one of the first-ever animals to go to space, and the very first to orbit the Earth. Tragically, Laika did not survive the full trip, but one animal who did survive going to space in a very successful mission was a French cat named Félicette. You’ve probably never heard of her, and this is her story.

We’re willing to bet that most people had no idea that France even had a space program to begin with, but indeed, by the 1960s they were sending rats into space. It seemed that the next logical step was to send something slightly bigger to space, so in 1963 the French scientists decided on a tuxedo cat they labeled “C 341.” Initially they declined to give her an actual name because they didn’t want the astronauts to get too attached; nonetheless, the media quickly named her “Félicette,” which was a nod to the cartoon character Felix the Cat.

On October 18, 1963, Félicette was launched into space from a French facility located in Algeria. The mission itself lasted just 13 minutes and the rocket reached a height of 94 miles before she was subjected to five minutes of total weightlessness (which was probably very confusing for a cat!). Then the capsule separated from the rocket, her parachute was deployed, and she returned to Earth safely, making her the first cat to reach space!

Sadly, French scientists euthanized Félicette just two months after the mission, so that they could study her brain. Altogether there were 14 cats being trained and studied for flights to space, but all of the subsequent missions failed, so the French scientists changed to studying monkeys instead. Regardless, Félicette’s mission proved to be incredibly influential for the French space program. It brought France into the space race as the world’s third civilian space agency, after the United States and the Soviet Union.

So how did our history classes skip out on teaching us about the very successful and influential mission of Félicette? Well, some believe that she did not become as well-known as Laika the dog, for example, because of the growing animal rights movement at the time – photos were released of Félicette with electrodes implanted in her skull, which probably didn’t sit well with a lot of people.

It’s not uncommon for non-human space travelers to get their own monuments and to be celebrated as heroes after the fact, but unfortunately, Félicette didn’t get what she was fully owed in recognition for quite some time. Several former French colonies, including the Comoro Islands, Chad, and Niger, created stamps in her honor. Additionally, the student astronomy club at Paul Sabatier University in Toulouse is planning to name its observatory after her. It is set to open in 2021 and will become the first French observatory managed entirely by students.

But interestingly, Félicette never got a monument…until recently, anyway. In 2017, someone started a crowdfunding campaign to erect a bronze statue of Félicette that would feature her sitting on top of the Earth, looking up into space, along with a plaque that would display the names of major donors. In April 2018, the campaign met its financial goal, and the statue was unveiled in December 2019 at the International Space University in Eastern France. Finally, Félicette will forever be able to gaze up at the night sky she once traveled! 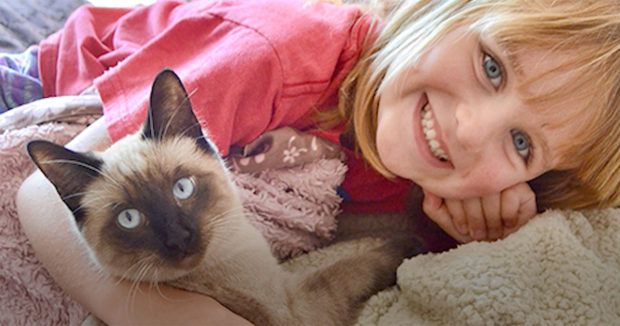 Super Cat Helps Young Girl Overcome Her Sensory Processing Disorder
We all know that humans and animals share incredible bonds. Sometimes these bonds are obvious, but other times they’re almost impossible to explain. Take, for instance, the story in the ...
click here to read more
Advertisement - Continue reading below
Advertisement - Continue reading below
Share  On Facebook