Not all heroes wear capes. Sometimes, they’re covered in fur! We’ve all heard tales (most likely from friends, and friends of friends, too) of dogs performing heroic feats for their beloved humans. In this story, however, our furry hero saves her little brother from one particularly vicious snake.

Not Your Regular Monday Afternoon

Tonka, a five-month-old Staffordshire bull terrier, had barely grown his fangs before he encountered his first brush with death. Madeline Mills, Tonka’s human, shares that her adorable fur baby was merely enjoying a Monday afternoon in their backyard in Queensland, Australia, when a snake tried to attack the unsuspecting, doe-eyed puppy.

The snake was later identified to be an eastern brown snake, whose venom is known to be poisonous and severely life-threatening. Fortunately for Tonka, his big sis, Millie, was around to defend him. This brave five-year-old dog, Madeline reports, had apparently swooped in to protect poor little Tonka from being bit by the venomous snake.

As a trained paramedic, Madeline was quick to notice Millie displaying signs of a venomous snake bite, so she wasted no moment rushing her precious dogs to get the necessary care and treatment from the local vets. Thanks to Millie’s sacrifice, no harm had come to Tonka. Millie, on the other hand, sustained several snake bites on the neck and the legs, which the veterinarians promptly treated with antivenom.

“I’ve seen a fair share of brown snake bites. It’s so frightening when it’s in your own home, and to hurt my fur babies is a different story,” Madeline shares to the news. “Luckily I was home and had woken up after my night shift,” she adds.

Not Without Her Scars

Millie may look victorious in this picture, but she is not without her battle scars. According to 9 News, Millie arrived at the animal hospital in critical condition. Not only did she have to be put on IV, but she also had to be under the supervision of a team of vets, who kept a close eye on Millie to ward off other complications like organ failure.

While Madeline and Tonka were allowed to return home the same day of the incident, the veterinarians advised Madeline to leave Millie in their care for a couple more days for treatment. Here she is looking skittish—but nonetheless awesome—with her equally awesome owner!

“If this was a child outside unattended for a few minutes you could only imagine,” Madeline cautions everyone. This caring fur mom of two hopes that in sharing her story, folks would become more vigilant for snakes roaming in their backyard. “Like any other Australian, you just have to be careful,” she adds. Madeline’s takeaway is for people to learn the basics of snakebite first aid and to keep their local snake catcher’s number handy.

All Kinds of Encounters Down Under

Thanks to its rich biodiversity, Australia is home to various kinds of critters you could imagine, prey and predator alike—and some of them won’t even shy away from taking up space in sprawling urban areas.

Neglecting to maintain your lawn could invite all kinds of wildlife to make a home out of your backyard, especially where snakebites are common occurrences (and maybe too common), so it’s important to always keep your grass trimmed.

While we hope this story warmed your heart as it did ours, all of us here definitely don’t suggest keeping canine companions as your first line of defense against unwanted visitors! After all, our furry little friends simply deserve better. 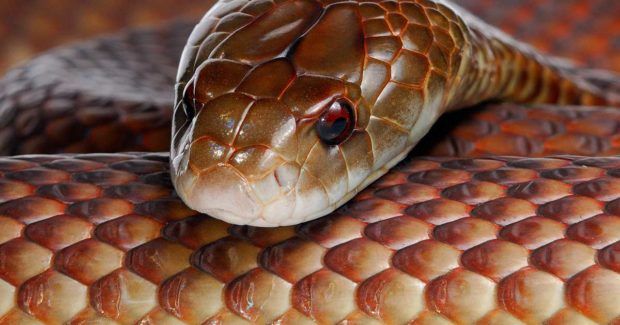 The Deadliest Snakes Ever Found on the Planet
Snakes are clawless, legless, and without the maw of teeth that other dangerous animals, such as sharks and tigers, sport. However, they’re still considered some of the spookiest and most dangerous ...
click here to read more
Advertisement - Continue reading below
Share  On Facebook