After Tragedy Struck, This Homeless Artist Turned His Life Around Through Painting

His sign read “Just Need a Little Help,” and thanks to the kindness of a few strangers and his own ingenuity, one homeless artist is beginning to turn his life around.

Jon Masters found himself on the streets of Pensacola, Florida. With all of his worldly possessions at the bottom of the ocean (literally), penniless, and with a service dog to look after, Masters needed a helping hand. He turned to panhandling.

“I was trying to get some money for some paint supplies,’’ Masters told USA Today, sitting on the side of the road. “My sign said ‘Just Need a Little Help,’ and it was the truth.”

It took three days, but Masters finally got the $40 he needed. He bought some paint and some canvasses, and then Masters and his service dog, Sheba, went to sit beneath a tree. He started to paint. Before too long, his paintings were in high demand.

At $25-$40 per painting, Masters’ works quickly helped him get things back together after his life took a sudden dramatic turn.

Masters had sailed from New Orleans down to Florida, but then found himself in jail for “trespassing” in a public area because Sheba wasn’t wearing a proper service dog vest. While in jail, Masters’ boat sank, along with everything he had. The sailboat had been his home.

But even before the arrest, things had not been great. Masters suffers from seizures, which Sheba helps detect and recognize. He said he has anxiety issues, and “some mental stuff like the rest of us,” as well as shoulder problems. Due to this, he hasn’t had a “job job” in five years. So he started painting.

“I’m just trying to get some money together,” he said. “I’m not trying to be the homeless guy with all the problems. I have a little talent for painting, and that’s what I’m trying to do to make it by.”

That talent, with the help of a few YouTube tutorial videos, has helped Masters find a steady stream of income, as well as a new purpose in life. Masters now sells his artwork at a farmers’ market, and even helps organize a weekly barbecue that brings other homeless artists together, according to HuffPost.

“I’ve got other homeless guys coming up to me to check out what’s going on,” Masters told the Pensacola News Journal. “They’re hearing about my story from other homeless people.”

Masters’ attitude about his stroke of bad luck not only inspires others who share similar predicaments, but helps inspire those who feel a little down on their luck.

“I’m a firm believer that nothing bad ever happens, even though it really looks like crap,” Masters said. “Just not enough time has gone by to see what the good is going to be.”

There’s always a light at the end of the tunnel.

Be sure to SHARE the inspiring story of how this homeless artist turned his life around, and see more of Masters’ work on his Facebook page.

Editor’s Note: This piece was originally published on November 5, 2015. 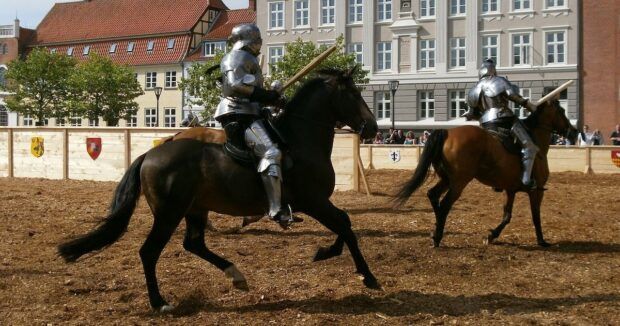 Common Lies Told About Medieval Times
There are few eras in human history that have inspired the level of stories, rumors, fables, ornamentation, jewelry, and/or nostalgia as the Middle Ages. From the legend of King Arthur’s ...
click here to read more
Advertisement - Continue reading below
Advertisement - Continue reading below
Share  On Facebook