May 26, 2016 | By Lauren Boudreau
Advertisement - Continue reading below

With China’s over-population problem, there comes more than just environmental degradation. There’s also massive traffic jams. If you think New York and L.A. are bad, you haven’t been to China.

To combat the problem, Chinese engineers have come up with a way to not only help traffic, but help the environment as well.

They’re proposing an eco-friendly bus that sits above the road on tracks and glides over cars. The Beijing-based company Transit Explore Bus introduced the idea at the 19th China Beijing International High-Tech Expo.

Unlike a monorail, the bus can pass through tunnels and bend around sharp turns the same way a car would. Instead of street-level bus stops, passengers would catch the bus on elevated stations. Each bus can carry about four times the amount of passengers a typical bus can – from 1,200 to 1,400 people, effectively putting less cars on the street.

Bai Zhiming, an engineer in charge of the project, said in a YouTube video that the bus acts like a subway but “it’s cost of construction is less than one fifth than that of the subway,” and that its construction could be completed in one year.

According to A Plus, the bus can reach a speed up to 37 miles per hour between stops and sits about six and a half feet off the ground, which raises some concerns for how taller vehicles, like trucks, will be affected.

Overall, though, it could be a great solution for China’s road congestion.

The bus is scheduled to be tested in Qinhuangdao City later this year and could be permanently in place by the end of this year. 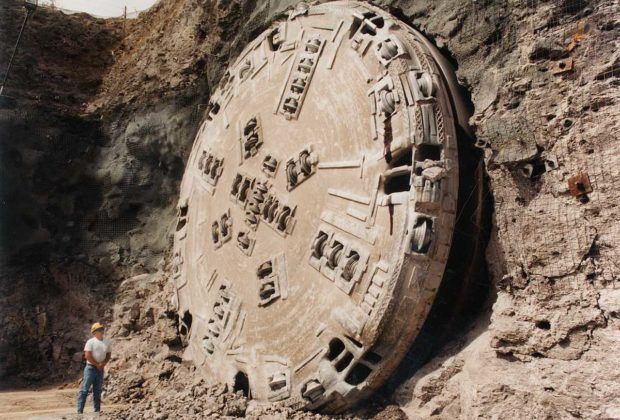 These Government Photos Were Top Secret – Until Recently
Aliens and Soviets and moon landings, oh my! These are some of the topics of the following declassified government photos that the CIA once wanted absolutely no one to see ...
click here to read more
Advertisement - Continue reading below
Advertisement - Continue reading below
Share  On Facebook