On the Issues: Clinton and Trump Both Want to Save Your Social Security

Throughout the last few years, Social Security has often become a flashpoint for criticism in political spheres with many on the Right claiming the program’s impending insolvency means it must be reformed substantially, while many on the Left say the program’s overall popularity proves it works and only minor changes are needed. As we veer into the final days of the 2016 election, where do the candidates stand on this highly important issue among voters?

It turns out Democrat Hillary Clinton and Republican Donald Trump are not so far apart on the issue.

On Donald Trump’s campaign website, the candidate lays out no specific plans on Social Security benefits in his “Policies” section on his site. Of the 14 individual sections, social security only appears in the immigration section of the website where Trump makes the claim his opponent will provide social security and Medicare for illegal immigrants (more on that below).

But as recently as February 2016, Trump said he will “save Social Security” and has historically been a supporter of the program.

According to NPR, Trump said at a Republican primary debate in Miami, “I will do everything in my power not to touch Social Security….I want to make our country rich again so we can afford it.”

Trump’s premise is that his economic plan will put more young people into the workforce and help boost the Social Security fund, so as president he would not have to pass any measures to alter the program. Trump sees changing Social Security as a surefire way to lose an election.

In a 2013 speech at CPAC, Trump said, “As Republicans, if you think you are going to change very substantially for the worse Medicare, Medicaid and Social Security in any substantial way, and at the same time you think you are going to win elections, it just really is not going to happen,” adding that polls show that tea partiers are among those who don’t want their entitlements changed. “What we have to do and the way we solve our problems it to build a great economy.”

“Social Security faces a problem: 77 million baby boomers set to retire,” wrote Trump in his book, Time to Get Tough. He continued:

“Now I know there are some Republicans who would be just fine with allowing these programs to wither and die on the vine. The way they see it, Social Security and Medicare are wasteful ‘entitlement programs.’ But people who think this way need to rethink their position. It’s not unreasonable for people who paid into a system for decades to expect to get their money’s worth–that’s not an ‘entitlement,’ that’s honoring a deal. We as a society must also make an ironclad commitment to providing a safety net for those who can’t make one for themselves.”

For Hillary Clinton, her campaign has an entire section devoted to “Social Security and Medicare” where the Democratic candidate says “We must preserve, protect, and strengthen these lifelines.”

“Republicans are using scare tactics about the future and effectiveness of Social Security to push through policies that would jeopardize it. The real threat is Republican attempts to undermine the bedrock of the system. Hillary believes that Social Security must remain what it has always been: a rock-solid benefit that seniors can always count on—not subject to the budget whims of Congress or to the fluctuations of the stock market. She fought Republican efforts to undermine Social Security when she was a senator and throughout her career, and she will fight them as president.”

Clinton’s campaign says they will fight any attempts to “privatize” the system, a long-held Republican initiative that seems to be at odds with Trump’s public stance.

Clinton also says she will fight any attempts to reduce annual cost-of-living adjustments, oppose “Republican efforts to raise the retirement age,” and oppose “closing the long-term shortfall on the backs of the middle class, whether through benefit cuts or tax increases.”

While Trump says he does not want to touch Social Security, Clinton wants to see the program change to help address the potential shortfall it could run several decades from now. Clinton’s plan wants to raise Social Security tax on the wealthiest by raising the current cap and “taxing some of their income not currently taken into account by the Social Security system.”

In 2016, the Social Security cap was $118,500, meaning all earnings below this threshold are subject to the tax. Any income above this, no matter how high, is not taxed. So, whether an individual makes $1 million or $1 billion per year, the Social Security tax remains the same for each person.

Clinton’s plan looks to raise the cap to include some income up to $250,000, according to CNN Money.

In regards to Trump’s claim that Clinton plans to provide Social Security and Medicare for illegal immigrants, there’s not a straight-forward response, but PolitiFact rated his claim as “Mostly False” after a thorough examination. In their assessment, there are two important notes: the article points out that non-citizens or “aliens” are eligible to receive SSI benefits under certain conditions, but only if they have been paying into the program for at least a decade. This was established by President Reagan in 1986 and updated in 1996.

The article also shows that undocumented workers paid about $13 billion into Social Security in 2010 and only received about $1 billion in benefits in return. Based on this, non-citizens are actually helping to boost the coffers of the Social Security Trust Fund. 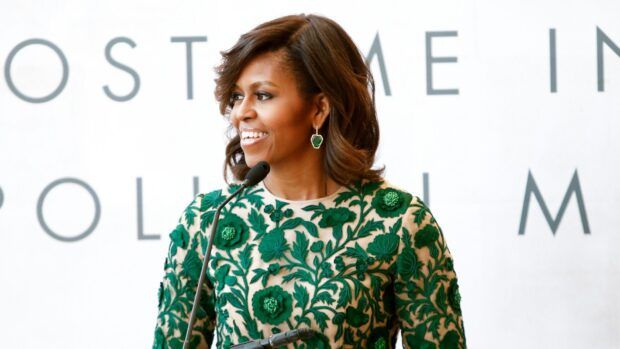 Ranking America’s First Ladies From Most to Least Popular
The exact role of the first lady in American history has always fluctuated depending on the year, social context, and the woman herself. However, during the Clinton administration is when ...
click here to read more
Advertisement - Continue reading below
Share  On Facebook