Here’s a sentence you don’t read often: a car wreck may have saved the driver’s life.

Jordan Grahm was an obese man, weighing in at nearly 300 pounds by the 9th grade. Being big most of his life, he was resigned to a life of unhealthy eating and depression.

Jordan’s mother tried to help him lose the weight, but his high school football coach encouraged him to keep eating to use his size to his advantage on the field. As he continued to grow, so did doctors’ concerns that Jordan was literally eating himself to death.

His mother suddenly and unexpectedly passed away in her sleep only three weeks before Jordan’s 15th birthday. Jordan began to use eating as a coping mechanism, ignoring his doctors and ballooning to over 400 pounds by the time he stopped checking the scale.

You have to be willing to push! #transformationtuesday

“I couldn’t grasp how bad it was,” said Grahm in a video for Bodybuilding.com. “Or maybe I did, and I didn’t care. I didn’t care at all whether I lived another day. I sometimes wished that I didn’t.”

In 2008, Grahm totaled his car in a wreck that could have claimed his life. Most people would just be happy to be alive, but Jordan saw something more.

“Maybe it was my mom, like, maybe I should be around. Maybe there’s a reason,” Grahm said of his crash in the video.

The 400-pound Grahm went for an hour long walk with his dog, Blackberry. His mile-long walks turned into four miles, six days a week, and the number on the scale started to shrink. His diet also dramatically changed, cutting soda and fast food out of his life completely. Within two months, he lost 40 pounds. Less than a year in, he had lost 100 pounds and realized that his new lifestyle was becoming a reality.

Grahm shrunk from 420 pounds to 209 pounds due to his hard work and new diet. But the change didn’t stop there. Jordan began to lift weights, eventually participating in power lifting competitions. His life changes also expanded beyond his own body, changing his career to become a personal trainer and motivational speaker.

You can watch the full story of Jordan’s amazing transformation here: 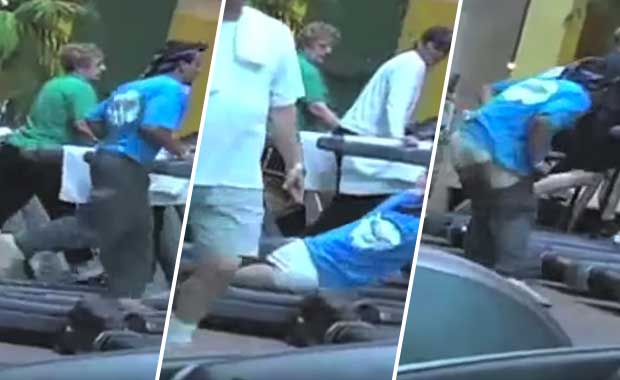 Ultimate Gym Workout Fails
With the New Year comes the promise from millions across the nation to get into shape, be healthy, and better themselves. But as they pour into their local gyms for – ...
click here to read more
Advertisement - Continue reading below
Share  On Facebook