Gospel singer Kim Burrell will no longer be honored at the BMI Trailblazers of Gospel Music Honors following her controversial remarks about homosexuality.

Burrell was due to be honored by officials at the performing rights organization alongside singer/songwriter Marvin Sapp on January 14, but in a statement released on Friday they announced she will no longer be honored or be a part of the ceremony after video footage from a sermon showed her calling homosexuality “perverted” was posted online earlier this month.

“BMI’s Trailblazers of Gospel Music is an annual celebration of gospel music and its many talented songwriters,” BMI officials said in a statement on its website. “Given the controversy surrounding this year’s co-honoree Kim Burrell, we have asked her to not take part in the ceremony in order to allow the focus to remain on the songwriters and their music.

“BMI was founded over 76 years ago with an open door policy to welcome songwriters across all genres, and that same spirit of tolerance, diversity and inclusiveness continues today.”

Sapp will still be honored at the annual event, which is due to take place at the Rialto Center for the Arts in Atlanta, Georgia.

Burrell, who sings “I See a Victory” alongside Pharrell Williams on the soundtrack of new film Hidden Figures, was also dropped from performing on The Ellen DeGeneres Show following the controversy and her radio show on Texas Southern University radio station KTSU has also been canceled.

Pharrell told Ellen earlier this week, “I love her, just like I love everybody else, and we all got to get used to that – we all have to get used to everyone’s differences and understand that this is a big, gigantic, beautiful, colorful world, and it only works with inclusion and empathy.” 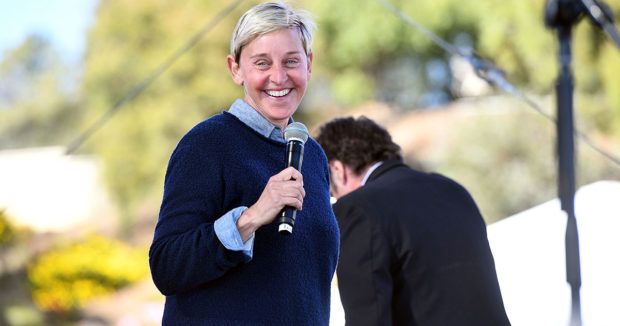 What You Need to Know About the One-and-Only Ellen DeGeneres
Two sitcoms, a monumental coming-out announcement, and a 15-years-and-counting talk show later, Ellen DeGeneres is one of the most beloved celebrities — and people — in America. Her humor, advocacy, and ...
click here to read more
Advertisement - Continue reading below
Share  On Facebook