Kirsten Bosly, a “plus-size” Australian blogger and mother of two, recently created a stir on social media after posting a body positive photo and caption to Facebook. The post comes at a time when messages of body positivity have been proliferating social media.

Bosly was on a beach vacation with her family when she realized she’d forgotten the cover-ups she usually wears over her bathing suit. While this would usually horrify her, the 41-year-old apparently had an epiphany of sorts.

Accompanying a photo of herself in a one piece bathing suit, she wrote:

“Today marks a new beginning for me.
For most of my life I have hated my body.
Despised it.
Loathed it.
Resented it.
Wanted so very much for it to change; for it to be smaller, thinner… less “fat”.
I’ve used it and abused it.
I’ve blamed it for a lot of things.
I’ve been terribly ashamed of its wobbles and dimples; like somehow they are the measure of who I am.

I recently read a meme that said something along the lines of “be in pictures with your kids because when you’re gone, the pictures will be all they have left” and it struck a nerve.
I’ve avoided pictures most of the time as I disliked how I looked in them.
Not any more!
Bugger that noise!
The truth is, I’m tired of being ashamed of my body; it’s done nothing but support me for 41 years.

Lena Dunham is about to grace the cover of Glamour magazine with her “Girls” co-stars and she insisted they not air brush out the cellulite on her thighs.
The magazine thinks this to be a revolutionary act; Lena thinks it’s just bloody normal and I agree.

So today I let go.
I let go of the hatred and resentment of this body of mine and chose to enjoy it for what it is; my body.

I asked The Pants to take this photo so the kids will remember us enjoying this day together, cellulite and all.
No cover up.
No board shorts.
No “modesty” towel.
No filters.
Just us.
Any you know what?
I’m not ashamed.
Really.
I look at this photo and all I can see is how happy we are and that’s awesome.
I finally feel free and it feels awesome!”

“I’ve received messages from moms who’ve lost children and have hardly any photos with them because of their own self-esteem issues,” Bosly told. Us Weekly. “I have been called brave, which is a gorgeous compliment but … I find it sad that a plus-size woman wearing a one-piece at the beach is considered an act of bravery. It didn’t feel brave. It just felt freeing!”

The widespread viral reaction to Bosly’s post is perhaps unsurprising, given the results of a study published by Dove earlier this year. The research found that body image issues for women is reaching a “critical level” worldwide. In Bosly’s home country of Australia, the study found that only 20 percent of women feel body confident. The only countries that came in lower were the U.K. at slightly below 20 percent and Japan at 8 percent confidence. The U.S. came it at 24 percent body confidence. The study also found that 77 percent of Australians blame “unrealistic standards set by media and advertising” in part for body image issues.

Bosly spoke to you Your Daily Dish about the huge reaction the post has received.

“I had no inkling the post would take off the way it did but I’m thrilled that it has. The response has been overwhelmingly positive and so many women have reached out to share their stories with me. I’ve spent the last few days laughing with joy and alternatively crying with joy that sharing my story has inspired and touched as many people as it has. I hope this is just the beginning.” 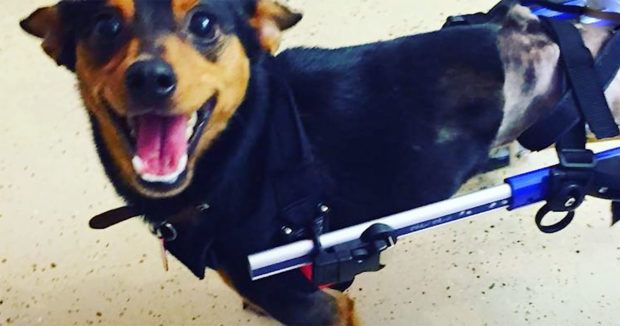 New Wheelchair Gives Paralyzed Dog Second Chance at a Happy Life
When a sweet, adorable dog was found on the side of the road with paralyzed hind legs, veterinarians thought it best to put her down to keep her from suffering. ...
click here to read more
Advertisement - Continue reading below
Advertisement - Continue reading below
Share  On Facebook