An unlikely artist has joined the ranks of Picasso, Michelangelo, and Monet. However, this artist comes with 4-legs and a tail!

Meet Dagger II, the talented pooch that is taking the artist community by storm. Dagger, also know as Dog Vinci, was originally training to become a service dog, but due to a fear of going up and down stairs, he had to find another calling. Fortunately, Yvonne Dagger, the dog’s owner, recognized an unusual talent in Dagger when she was working in her Massapequa art studio one day.

Posted by Dagger II aka DogVinci on Saturday, February 13, 2016

“One day, I said, ‘Hey, Dagger, do you want to paint?’ Well, his tail started to wag like crazy and he got so excited,” Dagger shared with Today.

After that, Dagger began painting on his own with a special paintbrush attached to a cardboard roll making it easier for him to grip. Yvonne Dagger explained that the dog’s skills come from his training during the time he spent as a service dog.

“Dagger was on the path to becoming a highly trained assistance dog for Canine Companions for Independence,” Yvonne Dagger shared. Even though his training was cut short “he had a great desire to use the commands he learned… whenever he could.”

Posted by Dagger II aka DogVinci on Thursday, March 10, 2016

Just like any up-and-coming artist, Dagger’s one-of-a-kind pieces aren’t free. His paintings are now selling anywhere from $50 to $200, with the proceeds going to charity for Canine Companions. According to ABC News, his works of art are becoming well known and he is already being “commissioned by people all over the world.”

“That’s really a great thing for Dagger to be able to do,” Yvonne Dagger told ABC News. “In his very four-legged, furry way, he’s able to give back to the people that were so kind to him.”

Dagger the dog also sports a red beret and matching scarf to complete the “artist look.”

“Dagger’s works are all abstract. He paints free and uninhibited,” Yvonne Dagger shared. “He loves to pick the color paint he uses.”

See more about Dagger and his story below, and make sure to check him out on Facebook. 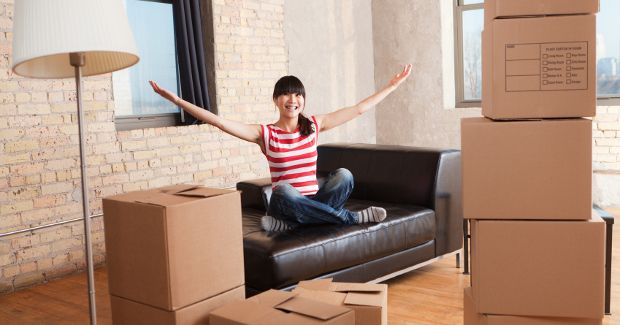 Things Every 20-Something Needs in Their First Home
The transition from college to real-world can be a harrowing one. There is nothing more stressful than trying to find a place to live, especially if you move to a ...
click here to read more
Advertisement - Continue reading below
Share  On Facebook