MTA Plans to Experiment with Open Gangway Cars in NYC

New York City is experimenting with a new “open” model for subway cars that could accommodate the growing city and help solve overcrowding on the subway.

The Metropolitan Transportation Authority recently released an image that shows a gangway train design. The design, currently in place in Toronto, London, and Paris, allows passengers to “spread out on the full length of a train, instead of cramming themselves into individual cars,” shared the The Daily News.

The open design for the train car could increase passenger capacity by 10 percent.

With the city’s population expanding in Brooklyn and Queens, the system is at full capacity. According to Wired, ridership on the subway has increased 2.6% between 2013 and 2014 with 5.6 million riders each weekday. A total of around 1.8 billion people rode the subway in 2014.

Due to increase in ridership on the subway, the MTA has increased service on its buses. It also plans to expand the subway, building a line on Second Avenue and recently completed extending the 7 line from Times Square to the west side of Manhattan. The gangway cars however would “expand the system’s capacity without the labor and expense of expanding the system itself.”

“There are no obvious downsides,” transit expert Yonah Freemark shared on his blog last year. The design would reduce overcrowding giving riders opportunity to spread out more easily. When the design was implemented in London, it increased capacity by 10 percent. The design also holds a security benefit since it is much harder to conduct illegal activities in an open car.

“The idea behind these open gangway cars is that we really want to look at all options as we move forward with the design of the next generation of subway cars,” shared MTA spokesperson Kevin Ortiz.

The MTA plans to spend $52.4 million on 10 open gangway cars for two different proposals to be used in a single train. The project is part of the MTA’s 2015-2019 capital plan. While the MTA has not reported when the cars could enter service, they will be used on the A and F lines, shared The Daily News. 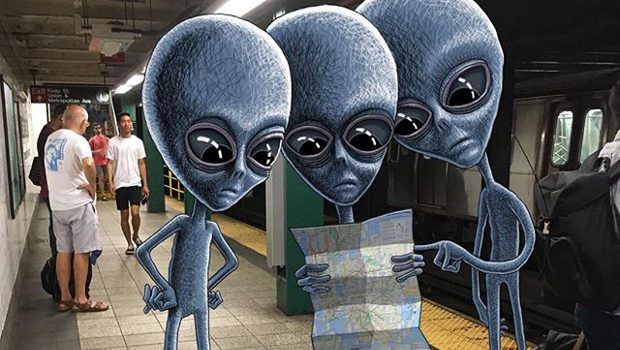 Artist's Subway Doodles Are a Monster-of-a-Hit With Commuters
Large, sometimes-hairy, usually-blue creatures live on and under the streets of New York according to one local artist. Ben Rubin takes pictures with his iPad and then applies his imagination in ...
click here to read more
Advertisement - Continue reading below
Share  On Facebook