In a photo series posted to Instagram and Facebook, photographer Elias Friedman, also known as The Dogist, captures the beauty of bringing your best friend to work.

“It was one of my favorite special series I’ve shot for The Dogist and tells an interesting story about how dogs can mesh with the lives of a professional dancer,” Friedman said of the series to Mashable.

Dogs have actually been allowed at the Company since the 1980s, Susie Taylor of ABT told Mashable. When the Company would go on long tours, they allowed the dancers to bring their dogs so they wouldn’t have to pay to board them, and the tradition just stuck. Now, dogs are constant companions at rehearsals.

“It was clear that dancers at this level dedicate a ton of their life to their craft and having a little (or big) friend to keep you company and be there for you in the ups and downs must really make a difference,” Friedman said.

Hudson, Old English Sheepdog (9 m/o), American Ballet Theatre, New York, NY • "He loves getting his teeth brushed. When I brush my teeth, he sits by the door until I brush his." #dogsofabt

The life of a dancer can be highly stressful, with low wages and long hours, but having the dogs there brings a lot of stress-relief.

“The dancers love having the dogs around,” Taylor said to Mashable. “It’s a great stress reliever, especially since the ballet can be such an exhausting work environment. Plus it really adds to the family-like atmosphere here.”

If you think the dogs could be distracting, well, you’re right. Taylor also said that mostly the dogs will sit quietly in the corner, but occasionally they might spend the day in the artistic department where a few have been said to escape in order to find their owners.

Lua, Dachshund (12 y/o), American Ballet Theatre, New York, NY • "She likes to do the Giselle lift. I taught it to her when she was 8 weeks old." @abtofficial #dogsofabt @luamarce 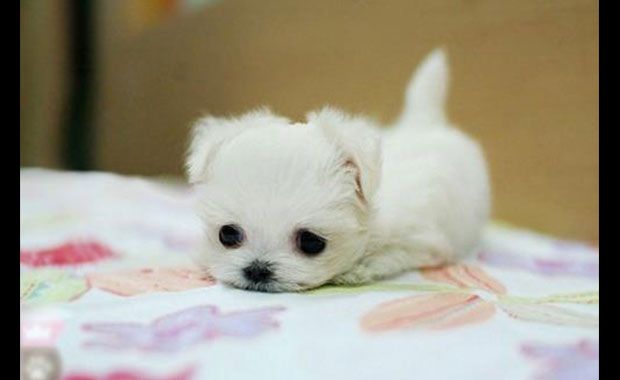 Really Small Dogs You Wont Believe Actually Exist
From the moment you set eyes on that cute little puppy, we know you’ll probably fall in love. From the king-size Saint Bernard to the miniature Chihuahua, both puppies and ...
click here to read more
Advertisement - Continue reading below
Share  On Facebook