Tim Tebow’s professional sports career may be resurrected after all.

The New York Mets have signed the former Florida Gators and NFL quarterback to a minor-league contract. After the signing was first reported by ESPN, the team confirmed it on their Twitter account.

They also announced that Tebow will participate in the Mets instructional league.

We have signed OF @TimTebow to a minor league contract. He will participate in the #Mets Instructional League. pic.twitter.com/I6gmW0b6hY

The 29-year-old Tebow held a showcase for 28 of the 30 MLB clubs last month, as a way to demonstrate his seriousness about changing sports.

According to the New York Daily News, the general consensus coming out of the demonstration was that Tebow had outstanding raw athletic ability, but would need to work on the fundamentals of baseball.

Tebow won two BCS National Championships (2007, 2009) and the 2007 Heisman Trophy while playing college football for the Gators. His NFL career was initially promising, including leading the Denver Broncos to an overtime playoff victory during his second season. However his awkward mechanics combined with the team’s acquisition of Peyton Manning ended his time in Denver. From there, Tebow had short stints with the New York Jets, New England Patriots, and Philadelphia Eagles. He hasn’t played in a professional football game since 2012. He’s worked as an on-air sports personality

In addition to his sports persona, Tebow has become known off the field due to his strong Christian beliefs. He’s written two best-selling, religious-themed memoirs, appeared in numerous documentaries, and took part in a pro-life themed commercial aired during the 2010 Super Bowl. 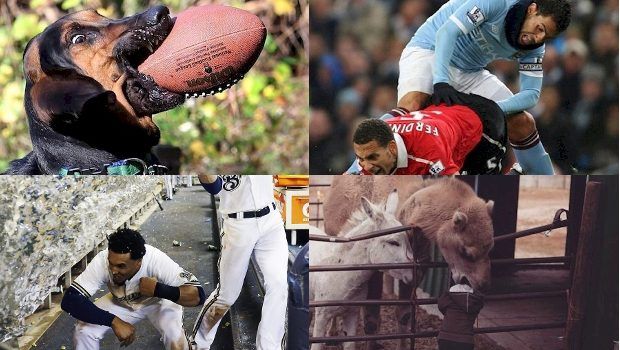 The 20 Most Perfectly Timed Photos Ever Taken
Timing is everything! Sometimes ordinary things are going on and yet the camera goes off. Suddenly, there’s something unusual captured, like a boy having a butterfly eye or two football players seemingly ...
click here to read more
Advertisement - Continue reading below
Advertisement - Continue reading below
Share  On Facebook