One NYPD officer is proving that a simple act of kindness can go a long way.

Joshua Lagan was able to capture the kind moment while he was waiting for a train in Grand Central Terminal. In the now viral photo, Lagan said he saw two cops running towards a homeless man who was digging through the trash. While Lagan thought the cops were about to reprimand the homeless man for his actions, it was just the opposite.

When the officer, later identified as Frank Rendina, realized the man was trying to find enough money to buy a pair of socks, he offered to pay for them himself.

Rendina and the homeless man, Ron Brown, have known each other for a few years, so it was easy for Rendina to approve this request. Rendina previously helped Brown celebrate his birthday with a few candy bars.

Even though Rendina has gone out of his way before, Brown was still shocked by his gesture asking, “Are you serious?”

“His doctor told him he needed diabetic socks,” Rendina said. “I said, ‘No problem. For Christmas, I will make sure you get the socks.”

“Thx for taking time to post this @joshualagan. We can all learn something. I’m so proud of #NYPD cops, and of all NYers,” Commissioner O’Neill tweeted.

Found on @facebook. Thx for taking time to post this @joshualagan. We can all learn something. I'm so proud of #NYPD cops, and of all NYers. pic.twitter.com/vhoQie232e 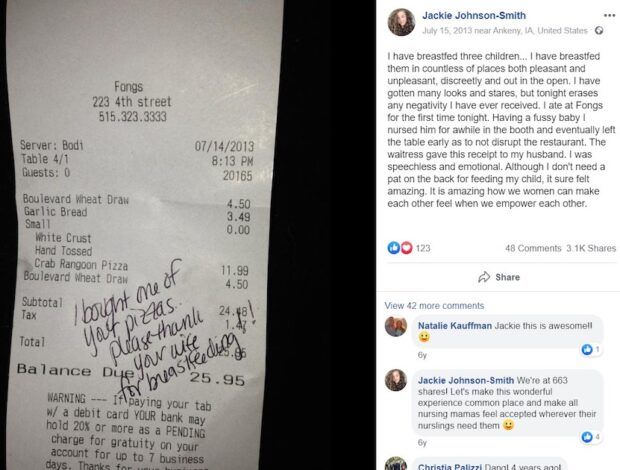 Waitress Slips Note To Husband, Brings Wife To Tears
Sometimes, the smallest actions can have the largest consequences. In this case, a mother of three got angry when a waitress gave her husband a note. She immediately thought the ...
click here to read more
Advertisement - Continue reading below
Share  On Facebook