Eight of the Most Memorable Presidential Dogs

Considering American’s long-running love affair with dogs, it should as no surprise that man’s best friend has been a companion to many U.S. Presidents while in office. At least 25 American Presidents had dogs that called the White House home and, oftentimes, these presidential pets became nearly famous among the American people. These are some of the most famous presidential dogs.

FDR and His Dogs:

Over the course of his record (and never to be matched thanks to constitutional amendment) four terms in office, Franklin Delano Roosevelt owned several dogs in the White House, including the German shepherd Major. However, FDR is most famously linked to the Scottish terrier Fala, with whom the president was often photographed.

Ike and The Banned Dog:

World War II hero-turned-politician Dwight D. Eisenhower became the 34th President of the United States in 1953. Ike came to define the 1950s after winning another election handily in 1956. During his years in the White House, Eisenhower had a constant companion in Heidi, a Weimaraner. However, the dog has the distinct “honor” of being the only presidential dog to be banned from the White House. Apparently, Heidi had too many accidents on very expensive rugs.

JFK and His Court:

The early 1960s administration of John Fitzgerald Kennedy is wistfully referred to many as Camelot, the idea being that it marked a golden era in American politics, the innocence of which was shattered by Kennedy’s assassination. Somewhat in line with the theme, the Kennedys had a veritable round table of dogs with them in the White House: Blackie, White Tips, Clipper, Wolfie, and Charlie. In addition, Kennedy was once gifted a Russian dog named Pushkina by Soviet Premier Nikita Khrushchev as a token of international cooperation at the height of the Cold War.

JBJ and His Dog’s Ears:

Kennedy’s successor, Lyndon Johnson, had several dogs during his time in the White House. Perhaps most notable were a set of beagles named … uh… inventively Him and Her. Beyond their less than original names, the dogs also dealt with the president’s rather odd habit of constantly pulling on their ears, which was often captured by photographers.

Richard Nixon, who became the 37th President of the United States in 1969, used his dog Checkers as a subject in a speech, entitled Checkers, to address the misuse of political expenses. The usage made Checkers, a Cocker Spaniel, one of the most famous presidential dogs in the nation’s history, even though the dog never set foot in the White House.

Ronald Reagan had his Bouvier des Flandres, named Lucky with him over the course of both his presidential terms during the 1980s. Reagan showed much affection for Lucky, apparently to the point that he didn’t even require the dog to gain his food through the trickle-down method.

In 2001, George W. Bush became the 43rd President of the United States moving into the White House with two dogs, his beloved Scottish terriers named Miss Beazley and Barney. Over the course of his eight years in office, Bush would often be photographed with the pooches.

Barack Obama followed George W. Bush into the White House, being sworn in as the 44th President of the United States in January of 2009. Over the course of his presidency, Obama and his family were often seen with Portuguese Water Dogs Bo and Sunny, who the family often referred to as “sister” dogs.

These are just some of the famous presidential pooches that have become famous over the years. Let us know if we mentioned your favorite. 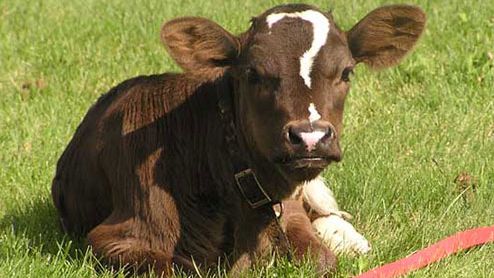 Unbelievable Photos Of Animals With Unique Markings
Just like humans, animals are unique. There is always something that sets each one apart from the others. One thing that makes animals physically unique is if they have a ...
click here to read more
Advertisement - Continue reading below
Share  On Facebook