The beloved filmmaker passed away on Tuesday from pneumonia complications after suffering a stroke at a hospital in Burbank, California, his spokeswoman tells The Hollywood Reporter.

He famously helmed Julia Roberts in her first big blockbuster, Pretty Woman, and they went on to work together in three more films, Runaway Bride, Valentine’s Day, and his final film Mother’s Day, which was released earlier this year.

Marshall also was a staple on the small screen, having executive produced more than 1,000 half-hour television show episodes.

He also had numerous acting credits to his name, taking on parts in productions such as A League of Their Own, Lost In America, Soapdish, and Never Been Kissed, as well as TV series such as Murphy Brown, Two and a Half Men, and the new version of The Odd Couple.

Throughout his career, Marshall earned five Emmy nominations. He was given the Producers Guild of America’s Lifetime Achievement Award in Television in 1998 and inducted into the Academy of Television Arts & Science’s Hall of Fame in 1997.

Following news of his death, fans and former collaborators took to social media to honor Marshall, including Happy Days star Henry Winkler, who tweeted, “GARRY MARSHALL (sic) Rest In Peace .. Thank you for my professional life. Thank you for your loyalty , friendship and generosity,” while Albert Brooks wrote, “R.I.P. Garry Marshall. A great, great guy and the best casino boss in the history of film.” 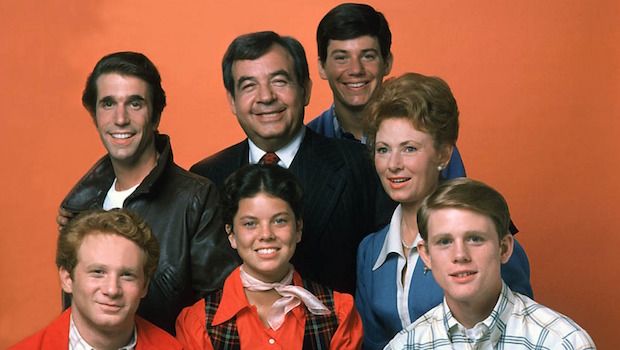 40 Fun Facts About ‘Happy Days’
Since its 1974 premiere, Happy Days has been one of the most iconic American sitcoms of all time. The series’ nostalgic look at the 1950s proved to be perfect for Americans ...
click here to read more
Advertisement - Continue reading below
Share  On Facebook