This Rescued Koala Has a Very Similar Look to David Bowie

Steve Irwin’s zoo just rescued a koala that has a striking resemblance to David Bowie.

After being hit by a car in Queensland in northeastern Australia, the little koala was rescued by the Australia Zoo Wildlife Warriors, a zoo owned by Steve Irwin’s family.

The zoo named the koala Bowie because, like the late music icon David Bowie, they share similar eye colors. The two different eye colors come from a rare gene called heterochromia, which causes the tiny koala to have one brown eye and one blue eye.

Bowie got lucky and was able to walk away from the accident with minimal injuries. At the zoo, she was given some fluids and treatment for a slight limp.

“Apart from being extremely lucky in avoiding injury on the road, she’s also incredibly unique as heterochromia isn’t a common occurrence in koalas – it’s more often found in domestic mammal species such as dogs and cats,” Dr. Sharon Griffiths, a vet at the zoo, shared with BuzzFeed.

The rare condition in her eyes doesn’t effect her sight at all. In fact, she is right on par with a typical koala her age.

“Bowie’s heterochromia doesn’t affect how she sees the world around her, in fact her eyesight is great, exactly what we like to see in a young koala.”

Bowie is currently staying at the zoo, resting up from her injuries. The zoo hopes to release the koala back into the wild as soon as she is healthy. 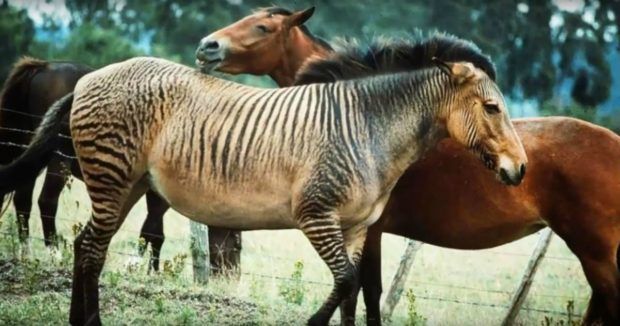 Weird Animal Hybrids You Won’t Believe Really Exist!
Thanks to years of experimentation in zoos around the world, some truly weird animal hybrids have cropped up on our radar. If two species are close enough genetically, their offspring ...
click here to read more
Advertisement - Continue reading below
Advertisement - Continue reading below
Share  On Facebook