The story of Robocop – the 1987 film – was inspired by British comic book hero Judge Dredd. Set in the dystopian future of a crime-ridden Detroit, Peter Weller portrayed “a terminally wounded cop who returns to the force as a powerful cyborg haunted by submerged memories.”

The film was directed by Dutch filmmaker Paul Verhoeven, who revealed to Collider that a sequel was in the works. A sequel might not be needed.

Cut to 2017 where science has caught up with fiction with the world’s first real Robocop that has reported for duty in The Dubai Mall.

Ruptly TV caught up with Robocop as he rolled around the mall and interacted with shoppers. A touchscreen menu on his torso invites mall visitors to scroll through items to find what they need.

But this autonomous robot cop also means business as it can connect visitors directly to human police in a live chat and identify criminals with face recognition.

“Officially it will be in the malls and airports,” Lt. Saeed Al Mazrooei from Dubai Police Smart Services Department, told Ruptly TV. “The next phase it has face detection for wanted list and it can give us alarm and detect faces. The robot can recognize if he changed something on his face.”

Designed by PAL Robotics of Spain, the prototype for Robocop was named REEM. It was initially described as a ‘she.’

“A full-size humanoid service robot that will make your events and conferences different,” it reads on their website. “She can be a receptionist, entertain and compliment your guests, provide dynamic information and even make presentations and speeches in many languages. Your best choice for events, conferences, fairs, museums, airports or even security. A friendly full-size humanoid robot that will make your event unique.”

It was also described as “highly customizable, robust and interactive with an 8-hour battery life that can navigate autonomously in real environments.”

This robot cop was unveiled at the 4th Gulf Information Security Expo and Conference (GISEC) on May 21 at Dubai World Trade Center. As of May 24, it will be used on public streets in the city.

“The Robocop is the latest smart addition to the force and has been designed to help us fight crime, keep the city safe and improve happiness levels,” Brigadier Khalid Nasser Alrazooqi, director-general of Smart Services at Dubai Police told Khaleej Times.

The United Arab Emirate’s first police robot will join a fleet of “smart” Dubai Police where robots will make up 25 percent of the force by 2030.

“We are looking to make everything smart in Dubai Police,”Alrazooqi told Gulf News. “By 2030, we will have the first smart police station which won’t require human employees.”

The autonomous two armed, wheel-based service robot can speak nine languages including Arabic and English. Robocop is equipped with an emotion detector which can recognize gestures and hand signals from up to five feet away. It has the ability to change his expression and greetings accordingly to put people at ease.

Robocop will also have a social presence as it will be linked to “various social media channels, such as Twitter, as well as artificial intelligence systems, mobile applications and websites, among others,” according to Gulf News.

Citizens can ask the robot questions, pay fines and access a variety of police information. However, Dubai’s future robot officer won’t be doing is carrying a gun.

“Technology-wise we are still struggling,” Alrazooqi told CNN. “Robots that can run similar to a human being, capturing criminals, carrying weapons. We are still waiting until manufacturers reach that target.” 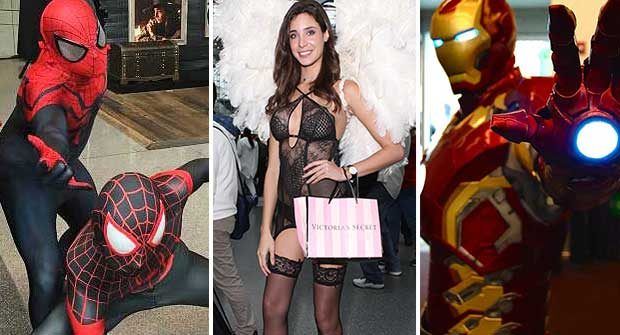 Fans Turn Heroes: The Very Best Cosplay From New York Comic Con 2016
New York Comic Con has come and gone and as every year, comics, TV, video game, and fans of everything nerd culture turn the metropolis figuratively into their very own Gotham, ...
click here to read more
Advertisement - Continue reading below
Share  On Facebook