Thanks to a special campaign on GoFundMe, athletes from around the world will have an easier time getting to the Special Olympics in Austria next month.

GoFundMe has launched about 500 campaigns highlighting athletes, teams, and delegations that are hoping to participate in the Special Olympic World Winter Games. Over 2,700 athletes from around the globe are expected to compete in nine different sports.

He continued, “It’s an honor to share the stories of these competitors who have overcome obstacles.”

While the main focus of the campaign is to raise money, several of the pages highlight specific athletes and shows what the Special Olympics means to them.

Simone Biles, Andre Drummond, Apolo Ohno, Torah Bright, and Hannah Teter are just a few of the athletes who are sponsoring individual teams as part of the campaign.

Teter is hoping to raise enough money to help 25-year-old snowboarder Daina Shilts get to the games. Teter and Shilts met four years ago during the games in South Korea. During that experience, Shilts showed Teter just how important the Special Olympics are for the disabled community.

“It means that I can show the world what I can do,” Shilts wrote on GoFundMe. “When I was first able to compete in the Winter World Games in South Korea, it was the first time I was able to compete against girls who were as good as I was. The competition was fierce, but it brought me back to why I started to snowboard in the first place. The freedom it made me feel.”

“It’s awesome to be different and I finally understand what that means. Do you know what a great feeling it is to have people from my hometown and nearby cities tell me they know who I am and how proud of me they are?” -Daina Shilts, @sowisconsin athlete // Daina is with @specialolympicsusa this week in Killington, VT for training camp in preparation for #Austria2017!! Read more about her story ➡️Link in bio

She continued, “I would not be the person I am today without the Special Olympics. Not a chance. I can now speak to people and feel good. I can even speak in front a group of people and on camera to people. I’ve realized that it’s actually awesome to be different and I am actually proud of myself, which is something I never thought I’d feel. I embrace who I am because of what I’ve done with Special Olympics and competing at the World Games.”

The first Special Olympics officially took place in Soldier Field in Chicago in 1968. The movement helped set the foundation for the Individuals with Disabilities Education Act and the Americans With Disabilities Act. 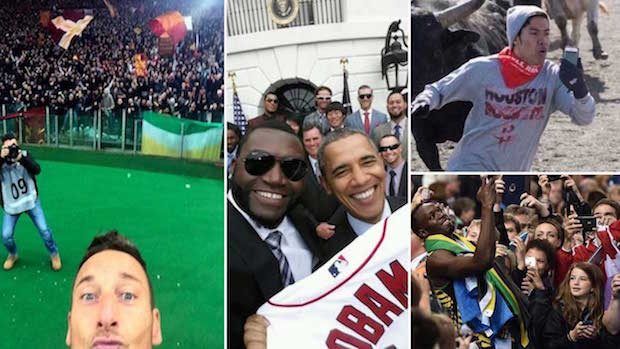 The Best Sports Selfies Ever Taken
As smartphones have become integral to everyday life, the act of taking selfies has become more and more prominent everywhere, including sporting events. Selfies aren’t just limited to fans though. ...
click here to read more
Advertisement - Continue reading below
Advertisement - Continue reading below
Share  On Facebook