Getting into the Christmas spirit can mean different things to different people. For Tammy Lyons Wilkinson, the spirit literally got into her. The New Castle, Indiana resident took to Facebook Live on December 14 claiming the voice of God instructed her on exactly how to care for a homeless man sitting outside her local grocery store.

Her live account of her special visitation has gone super viral attracting 9.1 million views, 327,000 reactions, over 240,000 shares and 68,000 comments. Some users poked fun at the retelling of her communication with Jesus as her account of what happened. They were apparently removed from the post as all that remains are staunch defenders.

One comment read, “What a good woman. You listened to that still, small, voice. The Holy Ghost spoke to your soul. Thanks for an uplifting message.”

Through tears, Wilkinson described what happened on that blistery cold Indiana day.

“I had an errand to run for work and so I came into the local grocery store to take care of some items that we needed,” she said in the video. “As I entered the doorway, I noticed a homeless man sitting on the bench obviously trying to get warm and stay out of this cold.”

She went into the store and reportedly heard the “voice of Jesus” say, “He loves bananas!”

Following the Lord’s request, she picked up some bananas, but the voice inside of her own head said, “He needs protein to sustain him.”

Wilkinson picked up three or four small items that could fit in his backpack that wouldn’t go bad and “would supply his body with the nourishment.”

What she really wanted to get him was fried chicken from the deli after she heard the voice say, “[Get] some warm food to put in his belly.”

She questioned Jesus about the sustainability of chicken lasting in his backpack, and according to Wilkinson, he bluntly replied, “I didn’t ask you to get him chicken.”

Complying once again with the request, she opted to buy chapstick instead so his “lips wouldn’t get chapped this winter.” She made the purchase but wished that Jesus would’ve let her get the fried chicken.

As she exited the store, she confronted the homeless man, spoke to him, gave him the items and wished him a “Merry Christmas.”

But as it turns out, Wilkinson’s urge to buy fried chicken was strangely heard by another woman, who came out right after Wilkinson and told the man she had bought him the warm food. 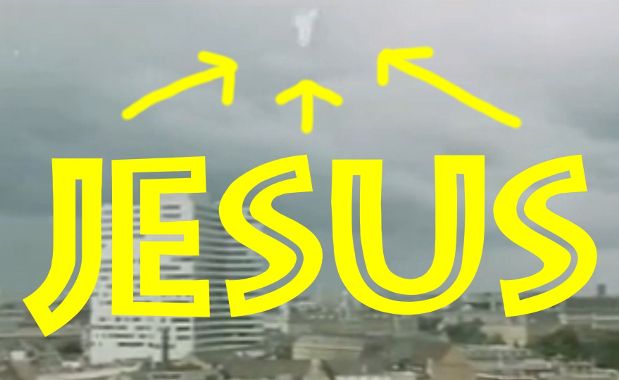 The Strangest Places People Have Seen Jesus and the Virgin Mary
We live in a world where many unexplained things happen. But perhaps one of the biggest (and most profitable) phenomena is when holy figures appear to us in random objects ...
click here to read more
Advertisement - Continue reading below
Share  On Facebook