Rocky is one of the all-time greatest boxing films. The story behind down-and-out boxer Rocky Balboa, who rises to fame to become a boxing champion, has been told time and again from Sylvester Stallone. He wrote the script in three and a half days and he turned down $265,000 to ensure he could play Rocky. The lesser known backstory was Chuck Wepner — aka The Bayonne Bleeder — from Bayonne, New Jersey. He could take a punch like nobody’s business. It was his tumultuous life in the ring that helped to flesh out Balboa.

Stallone talked about Wepner in a YouTube interview with a British talk show host.

“There was a guy named Chuck Wepner who became the modern day Rocky with the Bayonne Bleeder and literally was famous for bleeding in the ring,” he said. “This guy would start bleeding on the way to the ring. He went almost the distance, pretty close and I said, ‘there it is. That’s the symbolism I’m looking for.’”

In the film Chuck – featured at the 2017 Tribeca Film Festival – Liev Schreiber masterfully portrays Chuck Wepner  — warts and all — in a performance that will win your heart like Rocky first did in 1976. Narrated by Wepner, the film is reminiscent of Good Fellas with its lighthearted approach to the unfolding saga of this local champion who rises to sudden fame, but is ultimately defeated by his own demons.

The 70s time period fashion was embraced in detail — bellbottoms, Huckapoo shirts and Farrah Fawcett hairstyles for the ladies — while the men sported Fu Manchu mustaches and skinny mutton chop sideburns. Schreiber — who was also a producer on the film — topped off Wepner’s look with a thinning hairline and a fat swollen nose for all the times he took a punch there. Matching the real Wepner pound for pound was the least of his impressive portrayal. Schreiber knocks out the role with literal blood, sweat and tears.

Based on the documentary The Real Rocky — which ESPN aired in 2011 — writers Jeff Feuerzeig, Jerry Stahl, Michael Cristofer and Schreiber collaborated on the story of a New Jersey liquor salesman and seemingly unknown heavyweight fighter. At 35, Wepner got the chance to get into the ring with Muhammed Ali in 1975 just after regaining his title against George Foreman. It was meant to be an easy win for Ali — a publicity stunt — orchestrated by promoter Don King.

All they needed was “a white guy to get his shot at the heavyweight champion of the world.”

Wepner is trained by Al Braverman — a beefy Ron Perlman — who relentlessly believes in him.

Director Philippe Falardeau intersperses television footage of the real bout between Ali and Wepner. Ali closed both his eyes with blows to his face and broke his nose, but he was still standing. Wepner shocked the fans and the world by lasting 12 rounds. Ali won by a technical knockout.

While the boxing scenes are exciting, it’s the irresistible charm of Wepner, which Schreiber perfected, that draws you into the story. You can’t help but feel empathy for this man who gets intoxicated by his fame. When a young Sly calls, played by Morgan Spector — to tell him Rocky is based on his life and wants a meeting — Wepner spirals with all the trappings that come with his new-found celebrity.

He revels in knowing he is the inspiration for Rocky Balboa and parties like a rockstar at the disco with his childhood best friend (Jim Gaffigan) when Rocky sweeps the 1977 Oscars for Best Director and Best Film.

Wepner abuses drugs, alcohol and women, which resulted in the demise of his marriage to his no-nonsense wife Phyllis, who is strongly played by Elisabeth Moss.

One of the film’s most bittersweet moments is when Wepner meets Linda (Naomi Watts), the sassy bartender who becomes his next wife. Their undeniable chemistry and connection seemed to parallel the real love story between Schreiber and Watts — who sadly ended in a separation after 11 years of marriage.

In Chuck, Wepner is the real underdog living life in the fast lane who has to lose everything before he can realize what really matters. That journey is what makes him and Chuck a winner. 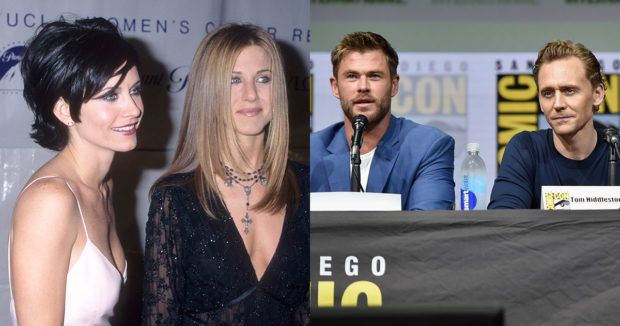 Celebrities Who Are Best Friends in Real Life
When it comes to being a Hollywood star, it’s hard to relate to many ordinary (i.e., moderately wealthy) people. So naturally, stars will be able to commiserate with other celebrities on ...
click here to read more
Advertisement - Continue reading below
Share  On Facebook