Should those who choose not to eat meat feed their pets the same diet? A Tumblr post from a vegan dog owner caused quite a stir on the social media site when one particularly knowledgable user weighed in on the dietary choices the owner was making for their pet.

The brouhaha began with a post from user sfveganyogi, which read, “On the menu for Maggie tonight is puréed sweet potato, puréed brown rice, sprouted organic tofu, chia seeds, and digestive enzymes. Does she look excited? She is!”

The post was accompanied by a photo of the adorable pooch along with the (admittedly delicious looking) dish. However, that’s where the trouble started.

While the post may look cute on the surface, many who saw it pointed out that a vegan diet can actually be dangerous for dogs. As one user – the delightfully–named Hang-The-Bastard – wrote, “The diet you are feeding your dog places a huge burden entirely on the pancreas, forcing it to produce large amounts of amylase to deal with the starch, cellulose, and carbohydrates in plant matter. (yes, even with your supplements) The carnivore’s pancreas does not secrete cellulase to split the cellulose into glucose molecules, nor have dogs become efficient at digesting and assimilating and utilizing plant material as a source of high quality protein.

“Then this stuff sits in the pet’s intestine (yes even with your supplemented enzymes) it not only irritates the lining of the bowels but also provides the perfect warm, wet environment with plenty of undigested sugars and starches as food for bacteria.”

The user ended their post with, “I respect your choice in leading a vegan lifestyle, but please do not force this on your pet who does not recognize the difference, your dog absolutely needs a healthier diet or it is going to develop health issues and I guarantee you, will not live as long as it could otherwise.”

Hang-The-Bastard wasn’t done, however, clapping back at another user, who defended the vegan dog owner and feeding the dog the diet, with more scientific facts:

1) “side reminder that some dogs can have vegan meat and be completely nourished and content, loving and excited over their meals.”

This is an assumption. The assumption that dogs are omnivores remains to be proven, whereas the truth about dogs being natural carnivores is very well-supported by the evidence available to us and is understood by many science welfare groups, universities, and doctors of veterinary science.

Dogs and wolves share 99.8% of their mitochondrial DNA, those who insist dogs did not descend from wolves must disprove the litany of scientific evidence that concludes wolves are the ancestors of dogs. And guess what? The wolf is a carnivore. Since a dog’s internal physiology does not differ from a wolf, dogs have the same physiological and nutritional needs as those carnivorous predators.

By stating otherwise you are ignoring and disregarding the work of contributing doctors, educators, and researchers who have compiled over 300 years of research and observations of the wild canine.

2) Do dogs and cats eat meat? Absolutely. With the right nourishments, can they live, thrive, and live a happy and healthy life without it?

No. But congratulations, you got one thing right, dogs and cats eat meat. Can they live a happy and healthy life without it? No they cannot. Cats and dogs health is largely dependent on the body’s ability to digest and make use of the food that is a part of their natural diet that is supplemented from meats. By creating a lack of naturally produced (meat, not supplements) protein in the body of the animal, you are putting your animals at risk for something called protein-losing enteropathy. Although this condition can affect any breed or age of dog, some dog breeds are more likely than others. That being said, feeding your dog and cat an all vegan or vegetarian diet and expecting them to thrive on it is a gamble at best.

There is an entire array of problems that can arise from a lack of natural protein.

3) “He/She seems healthy to me, and also seems interested in the food you’re about to feed them.”

Hey, wrong again. This dogs nose is dried out, it is almost a pale white pink, this is an indication of dehydration or something more serious. The eyes are not clear and bright as they should be, they are red and puffy around the edges, the lining of the eyelids should be pink rather than red. This dog also has a blank stare on its face, and the nose is not pointing at the food, this means the dog is uninterested and is a sign of lethargy. This dog is begging for this meal to be something nutritious. I work at a highly respected veterinary hospital and I see this more often than you would think, I know how to tell when a dog looks malnourished, and so would you if you worked and studied every day in the field of veterinary medicine.

Next time I hope you will take the initiative to educate yourself on these and other important topics on the care for your animal, before you preach something you have no idea about.

While other users bickered back and forth on the merits of vegan diets for animals, none of them used scientific facts in the same manner as Hang-The-Bastard.

So the real question is: What do you think? Should a vegan dog owner feed their pets the same type of diet they themselves eat, or do they have a responsibility to provide meat for their animals? Be sure to SHARE this post on social media and let us know your opinion on the matter. 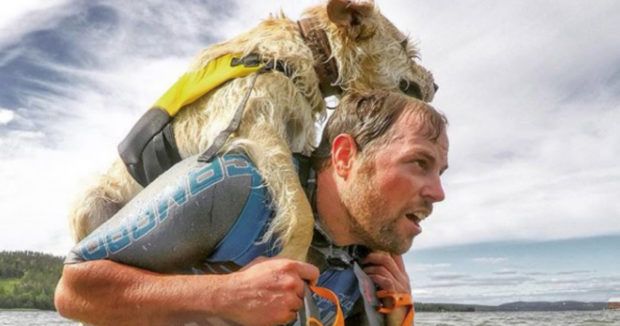 Stray Dog Follows Swedish Racing Team Through Ecuador
Mikael Lindnord, the captain of a Swedish adventure racing team, thought his grueling 700 kilometer trek would be just like any other. That was until he gave a meatball to ...
click here to read more
Advertisement - Continue reading below
Share  On Facebook