It might seem like an arbitrary thing, but have you ever wondered why grocery stores are laid out in certain ways? Or that they all seem to resemble each other in terms of layout? It’s not by accident the entrance is always on the right or that the snacks are usually in the middle of the store. It’s to make shoppers spend more.

By knowing just how and why grocery stores are laid out, you can save yourself from spending those extra bucks that they oh-so-plotted for you to spend.

YouTube channel Wendoverproductions released a new video explaining all the ways your store tricks you into looking at more items and coercing you into buying more expensive brands.

It all starts right when you enter the store. According to the video, Americans love shopping in counter clockwise formation. Therefore all entrances to American grocery stores will be on the right hand side, enticing people to move counter clockwise throughout the store. However, British grocery stores will have the entrance on the opposite side. Experts think it may have something to do with the side of the road each country drives on.

Research also shows that Americans spend on average $2 more when they shop moving in this direction.

You will also always find that the most bought food items (milk, meat, and eggs) are located at the edges of the store far apart. Why?

These most popular items are spread out to force shoppers to view as many products as possible while they make their way from one end of the store to the other.

If that weren’t enough, they also put the most popular items at the center of the aisle in order to get shoppers to walk past even more goods.

You might even already be aware that eye level items are the ones they most want you to buy, but they are also the most expensive. And, of course, there is also the “kid level.” This connotates items at a kid’s eye level that a child would most likely want.

Most importantly, beware of end caps. The end caps are the displays that face you at the end of an aisle. It’s easy to make impulse purchases while passing these displays because of the perimeter pattern they already have you going in.

Keeping these tricks in mind the next time you go shopping could help you save big on your grocery budget. Even if it’s just a couple dollars per trip, that could equal hundreds per year in savings. 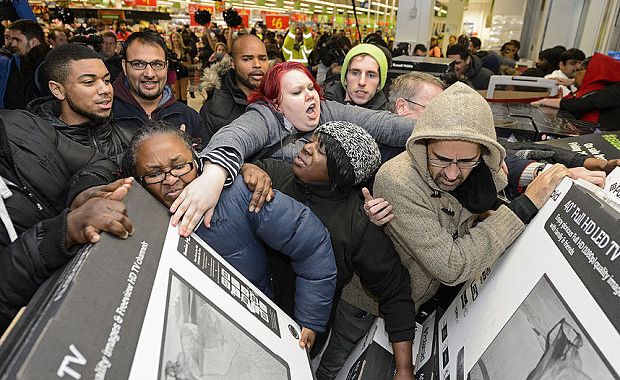 Honest Confessions Why People Love & Hate Shopping On Black Friday
Thanksgiving, it’s a time for family and loved ones, where we entertain our vaguely racist Uncle, watch football, and gorge ourselves on pounds of turkey, mashed potatoes, stuffing, and possibly ...
click here to read more
Advertisement - Continue reading below
Share  On Facebook