On the Issues: Clinton vs Trump on Foreign Policy

Of the many major issues that define the 2016 presidential election, few are more heated than the debate over foreign policy. Whether it’s Republican nominee Donald Trump accusing Hillary Clinton of “founding ISIS,” or she accusing him of being a “puppet” of Vladimir Putin, it’s been a major part of the sniping between the candidates.

However, the issue isn’t one that can simply be relegated to amusing political insults. The rise of ISIS, cyberthreats from China, and Putin’s growing military footprint are all issues that the next Commander in Chief will have to deal with. To that end, let’s examine how Clinton and Trump describe their respective approaches to foreign policy.

As laid out on her website, Clinton’s general foreign policy platform relies on strengthening America’s core relationships and rebuilding others with nations like Cuba. The Democrat also stresses being firm but peaceful with “rival” nations China and Russia.

Ensure we are stronger at home. We are strongest overseas when we are strongest at home. That means investing in our infrastructure, education, and innovation—the fundamentals of a strong economy. She will also work to reduce income inequality, because our country can’t lead effectively when so many are struggling to provide the basics for their families.

Stick with our allies. From the Middle East and Asia to Europe and our own hemisphere, Hillary will strengthen the essential partnerships that are a unique source of America’s strength. Hillary knows that NATO is one of the best investments that America has ever made. And she’ll continue to support Israel’s ability to defend itself, including by ensuring its Qualitative Military Edge, and oppose efforts to marginalize Israel on the world stage while supporting efforts to bring about a two-state solution. Hillary also will invest in partnerships in Latin America, Africa, and Asia with people and nations who share our values and vision for the future.

Embrace all the tools of American power, especially diplomacy and development, to be on the front lines solving problems before they threaten us at home. Diplomacy is often the only way to avoid a conflict that could end up exacting a much greater cost. It takes patience, persistence, and an eye on the long game—but it’s worth it. This includes:

Preventing Iran from acquiring a nuclear weapon. Hillary will vigorously enforce the nuclear agreement with Iran and implement a broader strategy to confront Iran’s bad behavior in the region, particularly the threat it poses to Israel.

Building stronger ties between Cubans and Americans. Hillary supports President Obama’s initiative to re-establish diplomatic relations with Cuba and calls on Congress to lift the embargo, while continuing to press for reforms.

Stand up to Vladimir Putin. Hillary has gone toe-to-toe with Putin before, and she’ll do it again. She’ll stand shoulder to shoulder with our European allies and push back on and deter Russian aggression in Europe and beyond, and increase the costs to Putin for his actions.

Hold China accountable. Hillary will work with allies to promote strong rules of the road and institutions in Asia, and press China to play by the rules—including in cyberspace, on currency, human rights, trade, territorial disputes, and climate change—and hold it accountable if it does not, while working with China where it is in our interest.

The Democratic nominee dedicates a whole section to dealing with terrorism and specifically ISIS. The breakdown describes a three-pronged plan that Clinton says she would use to defeat the terrorist organization on the ground in the Middle East, throughout the world, and domestically in the United States.

Have a real plan for confronting terrorists. The threat we face from terrorism is real, urgent, and knows no boundaries. Hillary has laid out a comprehensive plan to defeat ISIS by: taking out ISIS’s stronghold in Iraq and Syria, working with our allies to dismantle global terror networks, and hardening our defenses at home.

We have to defeat ISIS on the battlefield by:

We have to stem the flow of jihadists from Europe and America to and from Iraq, Syria, and Afghanistan. To that end, we must work with our allies to dismantle the global terror network that supplies radical jihadists with money, weapons, and fighters. That means:

We have to do more to identify and stop terrorists—including so-called “lone wolves”—from carrying out attacks in the United States, including:

As should be expected given their public personas, Trump’s foreign policy strategy is presented much differently than Clinton. Trump’s emphasis is more on endgame goals than the specific policies that will lead to his proposals. The Republican’s site is also more militaristic in tone. Also of note, there’s no mention of Russian leader Vladimir Putin, whose aforementioned relationship with Trump has caused controversy.

While domestic issues regarding borders, emails, and sex scandals have controlled the news cycle in the final weeks of the election, Americans should absolutely take note of each candidate’s foreign policy stance before they cast their vote. The nation’s future may very well depend on it. 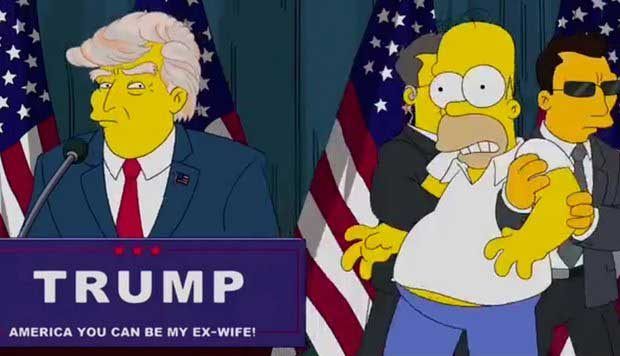 All the Times 'The Simpsons' Correctly Predicted the Future
The Simpsons has been some of the best satirical programs found on television over the last 28 years. The Emmy-winning animated series is the longest-running sitcom in history, as well as ...
click here to read more
Advertisement - Continue reading below
Share  On Facebook