Orphaned Raccoon, All Grown up, Thinks She’s One of the Family’s Dogs

When Rosie Kemp saw a tiny raccoon fall out of a tree in her backyard, she assumed that the mother must be nearby. But when the mother failed to show, Kemp knew she couldn’t leave the distraught animal and decided to mount an orphan raccoon rescue.

The baby raccoon suffered a broken leg and could barely move. Kemp and her daughter, Laura Young, who live in the Bahamas — where it’s legal to own a raccoon — took the baby in and nursed it. They fed her, cleaned her, and gave her a name, Pumpkin.

Now, Pumpkin is all grown up, but she never went back to the wild. She moved in with Young, her husband, and their two rescued dogs. Little did Young realize, Pumpkin quickly picked up on the dogs’ habits, even going so far as to think she is one of them.

“She instantly bonded with us and our two rescue dogs, and follows me and our two dogs everywhere we go,” Young told The Dodo. “She now thinks she is a dog … She is able to play and be rough with them, and she respects them when they have had enough.”

Pumpkin was apparently quite content with life out of the wild. She quickly took to the cool, air-conditioned home and took a liking to snacking on eggs and watermelon. She even learned to use the toilet! Domesticated much?

“Raising her was (and still is) a full-time job,” said Young. “They are so unbelievably intelligent, very aware, and I would say they are even able to express emotions.”

But Young cautions that raccoons are not ideal pets for everybody. Far from it, in fact.

“Raccoons are NOT pets,” Young explained. “They are wild animals, so they are quite moody. Unlike dogs and cats, they are not domesticated. Like a spoilt (sic) child if she doesn’t get her way, she will let you know.”

Still, Pumpkin sure does seem to adore her canine siblings, as well as the occasional cuddle on the couch.

Editor’s Note: This piece was originally published in October 2015. 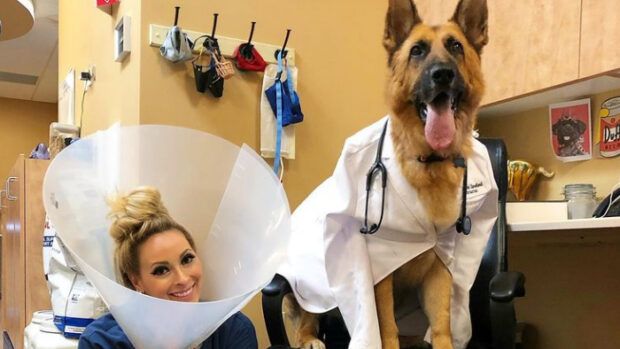 Cutest Pets at the Vet Moments
We’re always scouring the Internet for the cutest pets that we can find. Leave it to veterinarians to be able to provide the best content! One of the perks of ...
click here to read more
Advertisement - Continue reading below
Share  On Facebook